When you’re faced with your worst nightmares and forced to battle your ultimate fears there is nobody better to conquer them along side than a whiney, cringe worthy, irreverent teenager and a strangely mature, cheerful and charismatic 9 year old girl. Resident Evil Revelations 2 is another spin off of Capcom’s ever popular Resident Evil franchise only this time being brought to us in episodic chunks each containing two separate storylines with a bunch of new characters and intriguing story and for once it feels like this could be the first spin off in the series that belongs in the main lineup.

The story in Revelations 2 takes players away from the normal, stereotypical widespread outbreak seen in a Resident Evil game. Resident Evil Revelations 2 is set roughly 2 years before the events Resident Evil 6 but after the events of Resident Evil 5 and places our protagonists in the confines of the fictional island of Zabytij. Here a new menacing foe has been abducting select candidates with troubled pasts and conducting experiments on them with a new strain of virus called the T-Phobos virus, which reacts to and individuals sense of fear. The more frightened they become, the more likely they are to mutate. The player is swiftly thrust into this nightmare as you take control of Claire Redfield and newcomer Moira Burton as they are abducted during a raid on the anti-bioterrorism headquarters owned by Terrasave. Captured and unconscious they are taken to the island of Zabytij and injected with the T-Phobos virus. They are then subjected to various forms of mental and physical torture as they try to escape the island. Each chapter in their journey is separated into four episodes roughly spanning one hour in length and is split between two main characters, Claire Redfield and Resi favourite Barry Burton.The length of each episode is questionable when compared to the length of past titles but fortunately for Revelations 2 it is a good fit, especially with the introduction of the new gameplay mechanics the partner characters have to offer.

Newcomers Moira Burton; Barry Burton’s Daughter, and Natalia Korda; a 9 year old orphan, are the sidekicks of this adventure. Playing their pivotal role in escaping the island such as; finding hidden items, accessing hard to reach areas, and holding the torch. The partner characters act as somewhat of a secondary tool to the player rather than a second helping hand. Natalia has the special ability to sense the presence of other entities nearby or even through walls. Natalia can also fit through small openings in walls or vents that can often help lead the main character to circumvent trouble. Though she may be small and limited to what she can do, Natalia is a well thought out and useful character, her abilities make her unique to anyone in the cast and whilst feeble, she can deal significant damage by throwing bricks to stun and kill enemies.

Moira on the other hand is a completely different scenario. Moira has a troubled family past and because of this, she can no longer hold a firearm let alone shoot one, regardless of the trouble she’s in. Moira doesn’t have many redeeming qualities, she is constantly spurting pointless profanity and bitching about her father and her usefulness as a partner character is questionable at best. Moria acts as Claire’s guide dog throughout the game. Since Moira cannot hold a gun she has taken it upon herself to be the torch bearer, literally lighting Claire’s path through darkened areas. She can also blind enemies buy shining the torch in their eyes, allowing Claire a few seconds to get in a follow up attack. The crowbar is also Moira’s go to melee weapon and lockpick, but is pretty useless at both. The “lockpick” puzzles simply consist of finding the invisible hotspot and prying it open.

Moira seems to be more a of a tacked on character in favour of finding a suitable storyline for Barry. Her “abilities” aren’t so unique and distinct as to not question why Claire doesn’t just use the torch/crowbar as well. The only unique thing Moira brings is a horrible one liners arguably inherited from her father…..only Moira’s are more cringe worthy.

Aside from the four main campaign episodes players can also partake in Revelations 2 new amped up Raid mode. Raid mode is a gauntlet of sorts, giving the player a series of missions to complete and medals to earn. The roster consists of 15 characters to play as, including various Resident Evil favourites like Leon, Chris and Jill. You can also purchase Albert Wesker and HUNK from the marketplace if you have the cash. Each character having their own stats and individual traits such as HUNK’s cloaking ability or Leon and Chris only characters having access to the rocket launcher. With each episode unlocking roughly 52 raid missions ranging from normal to very hard, resulting in a sizable content package for the asking price.

Raid mode isn’t without its faults. Having so many missions to complete it can get rather repetitive, fast. The only way I found it to be more interesting was playing it in splitscreen co-op with a friend and even then the splitscreen screen ratio is still as terrible as ever and slightly disrupts the immersion when playing with a friend. There is supposed to be a patch to include online play functionality which is a huge plus but at the time of writing this review I have still to see such a patch. I can only hope it will be sooner than later. 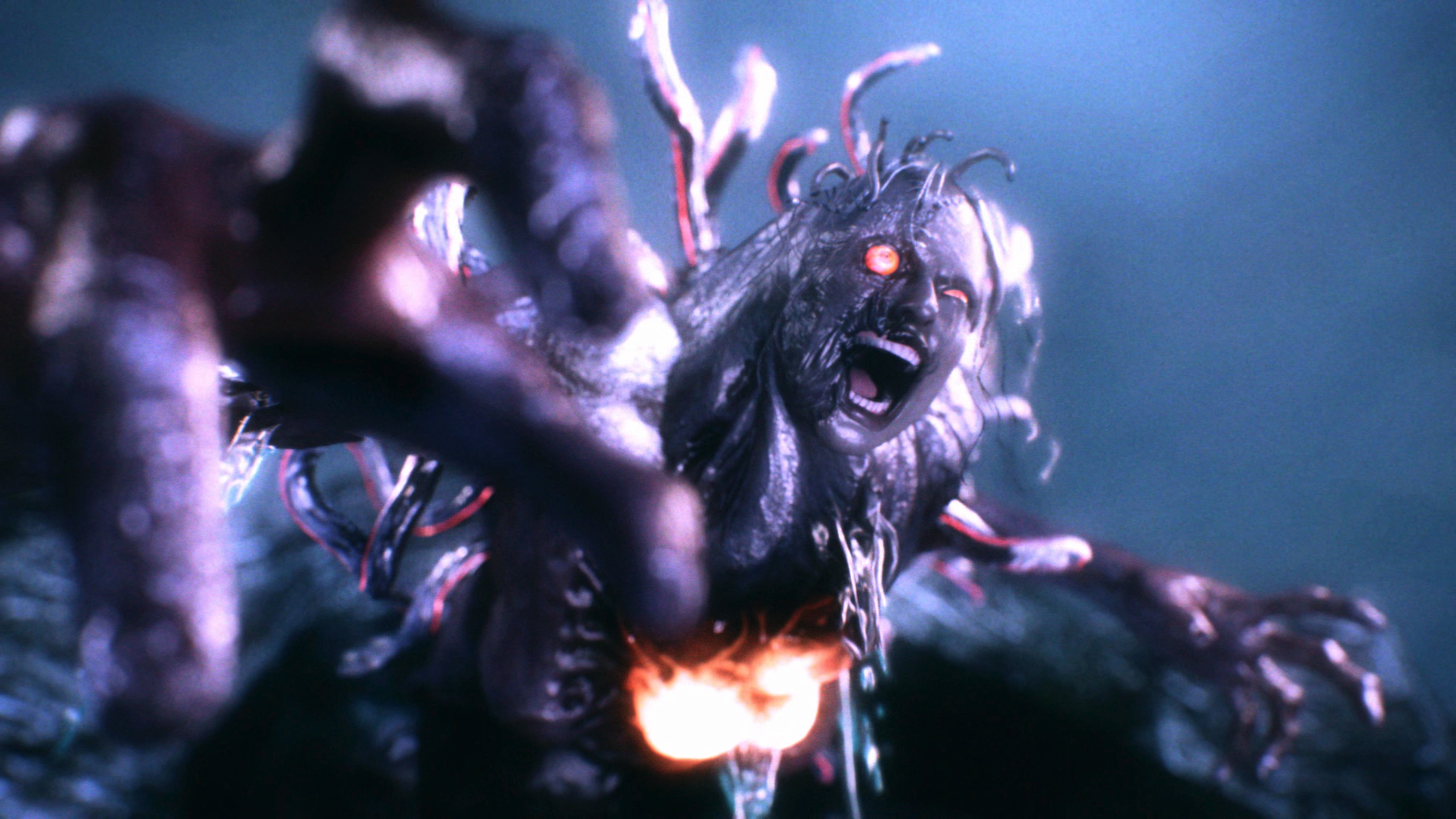 Once you’ve conquered the main campaign and decimated Raid mode then don’t fret as there is still plenty to do. Playing the main campaign earns you BP (Battle Points) which can traditionally be used to upgrade your character however saving your BP and spending it in the Extras menu can allow you to unlock additional game modes such as Countdown mode, where you must race to complete the episode before time expires and Invisible mode, where all the enemies you face are invisible unless exposed to Moira’s flashlight or Natalia’s sixth sense. These two game modes don’t offer much variety to the main campaign but they do offer a new challenge in how you play them. In Countdown you’ll be less focused on collecting ammo, weapons and herbs and focus on speed running between areas and exploiting shortcuts. Invisible Mode challenges your ability to memorise enemy locations and quick switching between characters on the run.

There is also an unlockable “good” ending; depending on your definition of “good”, which extends the ending epilogue and allows for an additional boss battle but ultimately the ending still remains the same.

Overall Resident Evil Revelations 2 proves that spin offs aren’t always bad and can even be more worthwhile than some of the series’ most recent titles. Offering a more plot focused story consistent with the series to date and the return of Barry Burton was is a welcome delight. however, his daughter was not. The new experimental partner system that makes one character combat orientated and forces the other character into a support role was a risky move but worked well for the most part as the A.I can point out enemies and use their supporting abilities effectively. The main downfall of Revelations 2 is the current lack of online support for both the main campaign and Raid mode and the consistent rambling and whining of Moira as she stumbles along side Claire. For the asking price of £4.79 per episode, it’s certainly a good deal. And is a must have for any hardcore fans of the series and plot.