Dead or Alive 5: Last Round (Xbox One Review)

When it comes to the Dead or Alive series I’m always faced with a sense of shame, but with Dead or Alive 5: Last Round I replaced that sense of shame with one of frustration as I desperately tried to get to grips with the fidgety controls that come with using an Xbox One remote. Dead or Alive has always been a fighting games series known for fast combat and (sometimes) awkward mechanics. Fortunately Last Round keeps the pace but there still seems to be a few bugs still to sort out. Team ninja have done a dang good job with the fifth installment in their series but Last Round doesn’t appear to be more than a simple port with a slighlty shinier new look.

Anyone who has played the last version of Dead or Alive 5 will know the story already. With the demise of the old DOATEC company in Dead or Alive 4 at the hands the Mugen Tenshin Clan, the game see’s Helena Douglas takes the reins of the newly formed DOATEC company and plans to rebuild it with her own ideals and re-opens the DOA tournament. Last Round consists of the same storyline as Dead or Alive 5 for last gen with no new twists. Each character from the core roster has their part to play in the story and as you juggle between them you will slowly piece together the connections in this limited and filler filled story. Starting with the formation of the DOA tournament and ending with the final showdown at the organization’s headquarters and everything in between is to essentially extend the storys length. I felt a tad disappointed that it was the same copy/paste story as in previous iterations. With the addition of all the characters from Dead or Alive 5 Ultimate and the two new characters in Last Round it would have been nice to see them make an appearance within the story to spice things up a bit but alas they were no where to be seen. Dead or Alive has always been one of my guilty pleasures in gaming being it the fighting or the volleyball. I say this since the guilt comes from playing a cast of characters that are vastly female centric each with breasts the size of a large watermelon or an inflatable beach ball. In Last Round we see the two new combatants enter the spotlight, Raidou and Honoka. Raidou is a former boss character from the very first DOA (and DOA Dimensions) game made cyborg and Honoka a cheerful, pleasant but timid schoolgirl with the posture of a cheerful, pleasant but timid schoolgirl. Unfortunately neither character is very unique other than in physical appearance as they steal their movesets from various other characters from the roster, though they are still interesting enough to be a decent matchup in versus. It can be quite difficult to predict when and what move will come out next since Honoka fights with Brads drunken fist style and can easily swing straight into La Maripossa’s (Lisa) Lucha Libre style.

Two former DOA stages make a reappearance as well; Crimson and Dangerzone. Crimson being another shanty town style rooftop level from DOA2 and Dangerzone an electrified elevator ride revised from the original DOA with explosive flooring. Altogether the new content doesn’t really impress or stick out, which is understandable considering DOA5:U was already a game packed with content. Last Round brings all the content from DOA5:U including; characters, stages, music, costumes, modes and breast physics. Even though all this content is packed into Last Round, It still feels a little empty at times. Primarily because we’ve seen all this content before and currently only having access to offline the content due to a bug that crashes your game when trying to accept or enter online matches restricts players to playing solo. 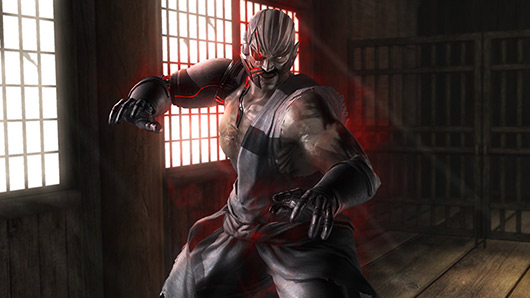 It is believed that the use of the Throwdown functionality (accepting fights mid match) causes this problem to occur but this has not been the case for myself, in fact its been much worse. Even when creating or joining a match through the lobby function still proves problematic since the game can still freeze upon connection or simply searching for a player. Though there are plenty of modes to entertain yourself until this bug gets patched by the developers with the likes of Arcade, Time Attack, Survival and Versus if you have a buddy to play with. I would also recommend playing these modes offline since connecting to the DOA leaderboards can cause this crash to occur as well. The modes in which you will probably spend most of your time in however will be the various training modes. The tutorial is essential for DOA newbies as it teaches the player all of the games mechanics in a hierarchical manner starting from the rudimentary beginner techniques to the more complex expert techniques. The other more traditional DOA training modes are Command List training where you work through a characters movesets until you master their fighting style and Combo Challenge which tests the players ability to perform character specific combos. With 34 characters to master, you’ll be there for a good while. And if worst comes to worst and things are getting a little flat you could just pop into the options menu and mess around with the breast settings to keep things bouncing along.

Those who have played any DOA game in the past will clearly understand me when is say that Team Ninja mainly focuses their efforts on making their characters as detailed as possible, from individual strands of hair to their more prominent features…like their eyes. However with Last Round essentially being a port of DOA5:U there isn’t much in the way of graphical improvement for next generation of consoles, the only real differences I could make out for myself was better anti-aliasing leading to smoother looking surfaces and a higher frame rate running at 60fps and 1080p resolution, giving those buds of sweat dripping down your characters body a shinier looking texture.

Team Ninja have also designed a new Soft Engine specifically for use in Last Round which helps convey the “softness” (nice save, Team Ninja) of the characters bodies enhancing the look and feel of character models and appendages. 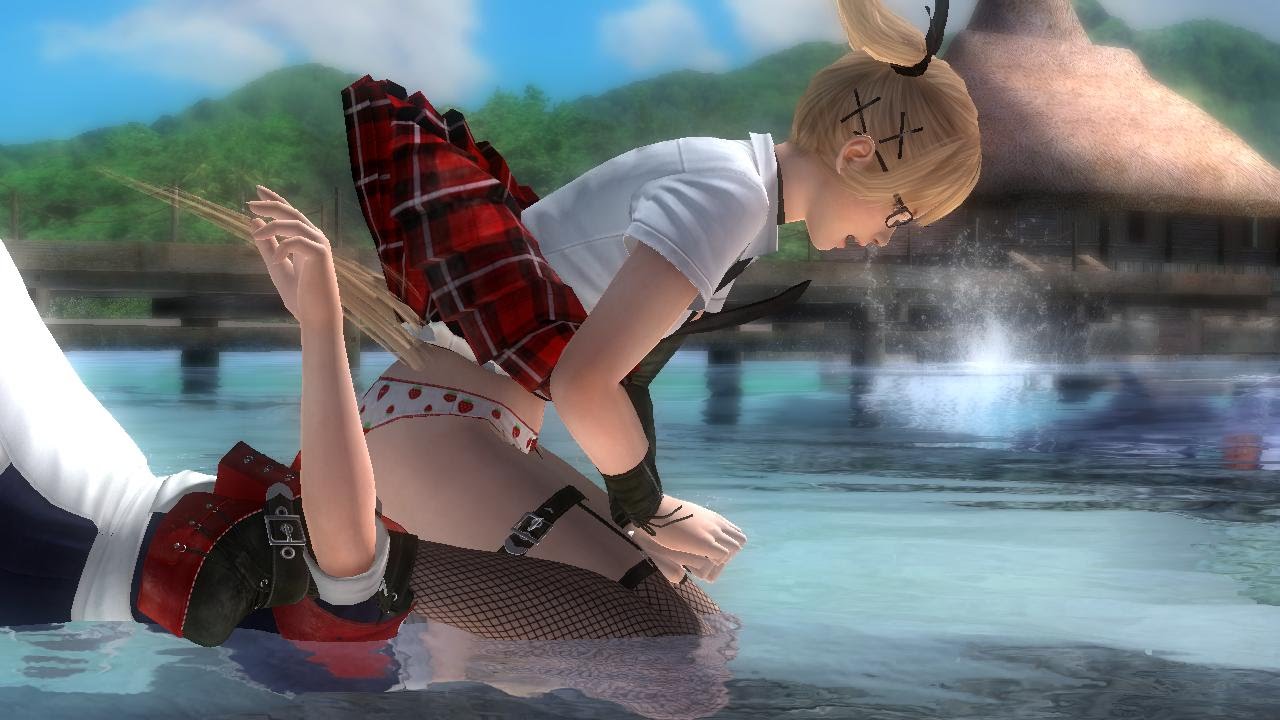 Lastly there is an array of extra options that have been brought across from DOA:U like the Titles feature used to customise your online character identity and used in conjunction your Fight Record to display how well you perform with each character, your online attitude and general leaderboard statistics. The Album feature is still as present as ever allowing the player to snap and collect an up to 9 of pictures of their voluptuous vixens (because who needs more than 9) and the Movies menu where you can replay any of the unlocked story cutscenes or characters victory and losing stances, the latter is mainly the depiction of your chosen character, broken on the ground, puffing and panting heavily. The player can also choose how dirty and sweaty their character is too, giving it that “I’ve just been beaten to the a bloody pulp, look at my sexy bruises” kind of feel (player appreciation may vary).

And if you still feel as though all this content still isn’t enough and wish to part with some extra cash then you can head to the Xbox Live Marketplace and purchase hundreds more costumes and 12 unique sexy paradise videos. Things gets so raunchy, you would be totally forgiven for thinking these scenes were lifted straight from a tubev.sex video. Watch all your favourite ladies run around zack island in their skimpiest outfits, basically it’s the Dead or Alive: Xtreme Beach Volleyball cliff notes version. And you could get all this for a low price of £61.49 (sexy videos sold seperately).

Dead or Alive: Last Round certainly stands it’s ground amongst the predecessors, although DOA may not be up to the same standards of its competitors like Tekken. It is a frantic and fast button mashing style of fighting with an over the top sexualised cast of characters that can still grip some of todays fighting games fanatics. The major downsides to Last Round is that it contains nothing new for series fans and is more or less a direct port with very little visual improvement, mainly focusing on improving the way character’s breast interact with their clothing, and very little in the way of additional content as the two new characters are simply jumbled versions or pre-existing ones. Last Rounds major downfall however are the game crashing bug that prevents players from playing online matches and participating in throwdowns, its not as if online matchmaking is impossible but I only got roughly 1 in 10 games between system freezes; even with the throwdown option turned off I still found my game locking up when accessing DOA servers. All in all its still a fun game but if you currently own Dead or Alive 5: Ultimate for the last gen of consoles then you’re better sticking with that version and maybe wait until some of the bugs have been patched or the game drops in price before picking it up.

Now if you shall excuse me, i’ve still got some skimpy swimwear costumes to unlock.

Dead or Alive 5: Last Round

One Comment on “Dead or Alive 5: Last Round (Xbox One Review)”