Dark Souls 2: Scholar of the First Sin (Xbox One Review)

The Souls series is one of the most well crafted and devious series to date, yet people have come to hold in high esteem due to its demanding difficulty, convoluted story, and the ability to make you its bitch. Before Dark Souls 2 was released in 2014 we were presented with a short gameplay teaser back in E3 2013 which has now become infamous for its falsity in graphical prowess and lighting (among other things). And many gamers were left disappointed with the final result.

Dark Souls 2: Scholar of the First Sin released a year later for next-gen tries to rectify some of the errors made by its former self. Unfortunately where there is good there must be bad, a polarizing if you will. Scholar of the First Sin tries its best to conform to what Souls players expect but continues to repeat its mistakes over and over again. Almost like the fate of its players, forced to repeat the same poor decisions until it ultimately learns its lesson.

FromSoftware’s tweaks and additions to the near non-existent and nonsensical story helps complete the sense of continuity that was missing, or at best lost, in the original release. The new NPC called “The Scholar” acts as a narrative bridge between the events that preceded the creation of what Drangleic is today and its past monarchs. As the players journey comes to a close The Scholar appears to the player to help fill in the gaps and possibly answer some unresolved questions. The Scholar himself does not actually add any significant story details to the game but mainly sheds some light on the scenario of the Chosen Undead and their role in the game, similar to Kingseeker Frampt in Dark Souls 1. He also references some DLC elements within the main story to try seamlessly blend the locations into one cohesive whole.

The Scholar’s presence isn’t solely to tell a tale and reminisce of the past, he also acts as the new end game boss. Upon fulfilling his questline you are confronted by him prior to taking the throne, once defeated you’re now presented with two options for ending the game, take the throne or refuse it. The fight against The Scholar is an interesting one and a nice change to the regular form of boss encounters, there are only so many times you can fight a boss with severe “attack the butt” syndrome before things start to get stale. A common niggle that plagued the rest of the games bosses was that they weren’t very well thought out or constructed resulting in bland, repetitive encounters.His large, misshapen skull like body makes him an easy target that is hard to miss but his shield of flame prevents the player from getting close enough to do any damage. You’re are now forced to think before you strike and study the attack patterns before you can find an opening before you can hope to win.

The main attraction that got people’s attention is the revised enemy and item placement. The major downfall that Dark Souls 2 suffered was the sheer bombardment of enemies that the player had to face at one time, turning an enjoyable experience in to a slog through thick shit. This resulted in players trying employ cheap tactics to make progress (magic users excluded), and miss large parts of what the game had to offer. The new refined enemy placements start brilliantly as the Forest of Fallen Giants now pushes players to observe their surroundings more by placing more enemies that are feigning death and explosive barrels around turtle knights, meaning you can no longer lure out enemies, and there is more emphasis on using the environment to your advantage. Things start to get a tad bit bleaker as the player slowly progress through the different areas of the game. Enemies are once again tightly packed in confined areas and now aggro to an insane extent leaving some areas nearly lifeless. The best example of this is at the Iron Keep, upon entering the keep enemies tend to aggro from rooms away and slowly start to charge in from the exterior of the castle. Forced into a flurry of blades from left, right, and center we are now forced back into the usual Dark Souls 2 mold. Some unfair spawn kills have been neutralised this time round, like the archers in the Sinner’s Rise are toned down and no longer attack you once you spawn at the bonfire. However, we are now assaulted at the start of the bonfire in the Heide’s Tower of Flame by a Heide knight once you have dealt with one of the area bosses. It seems like every time the developers manage to make a positive improvement to the game they find a way to counterbalance with an equally poor decision.

One thing that I did enjoy however was the recurrence of the Pursuer. The Pursuer now infact pursues the player throughout the game, showing up where you least expect him. I was always watching my back incase he emerged to cleave me in twain. Fights like these make Dark Souls the game it is. Battling a superior single opponent, thinking on your feet, and concentrating on your next move instead of worrying about being the centre of attention in an undead horde themed gangbang. A more positive note on item placement is that you can get the Dull Ember earlier on in the game meaning weapon upgrades can be planned in advance. Some late game weapons are also accessible earlier; like the Grand Lance and the possibility of the Mastadon Greatsword drop depending on how lucky you are.

Thankfully the community is still alive for the release of Dark Souls 2: Scholar of the First Sin and not off killing lycanthropes and japanese hentai monsters that look like they come straight out of animehentaivideos.xxx in Bloodborne. With the new servers that Fromsoftware are using they can now all up to 6 players online, extending the party to 4 player co-op and 2 slots for invaders. Again, I must argue that this has its downfalls. It is good that you can now add more friends to your roster whilst you slay the nasties of Drangliec but also a major disadvantage to those who invade as you only tend to get invaded by one player at a time. Instead of the usual one on one duels you would expect while invading, it’s now more of gank roulette type game. Sitting still, idly waiting to connect to someone’s game and crossing your fingers that it’s not gonna be a 4 vs 1 slaughter. I know many of you who would read this are going to disagree due to the fact that invasions can sometimes be a huge deterrent to most players. And you’re right, it can be. Unfortunately this isn’t the only one-sided scenario. Those who wish to “officially” duel can still put down their sign but the same outcome still occurs with the ability to now include more NPC summons if they have no online players to play with. NPC summons are everywhere this time round. Each area having at least two NPC summons available to players. The inclusion of so many A.I. makes Dark Souls 2: Scholar of the First Sin far easier than it was originally. Summoning A.I. is obviously optional, but these newly improved A.I can make things a cake walk if you let them and it is far too good an opportunity to pass up. A.I can now heal, aggro to great extents (Redeye Ring effect), have insane hitpoints and can now gesture…which is all we have ever dreamed of in NPCs. Summoning three to four NPC’s can make boss fights look like a scene from The Borrowers, all clambering round the boss, confusing its attack pattern. At one point I never even had to participate in the fight. I simply sat back as they all pounded into the boss while the boss was aggro’d towards one NPC, the other two stabbed it in the back. Essentially killing it. 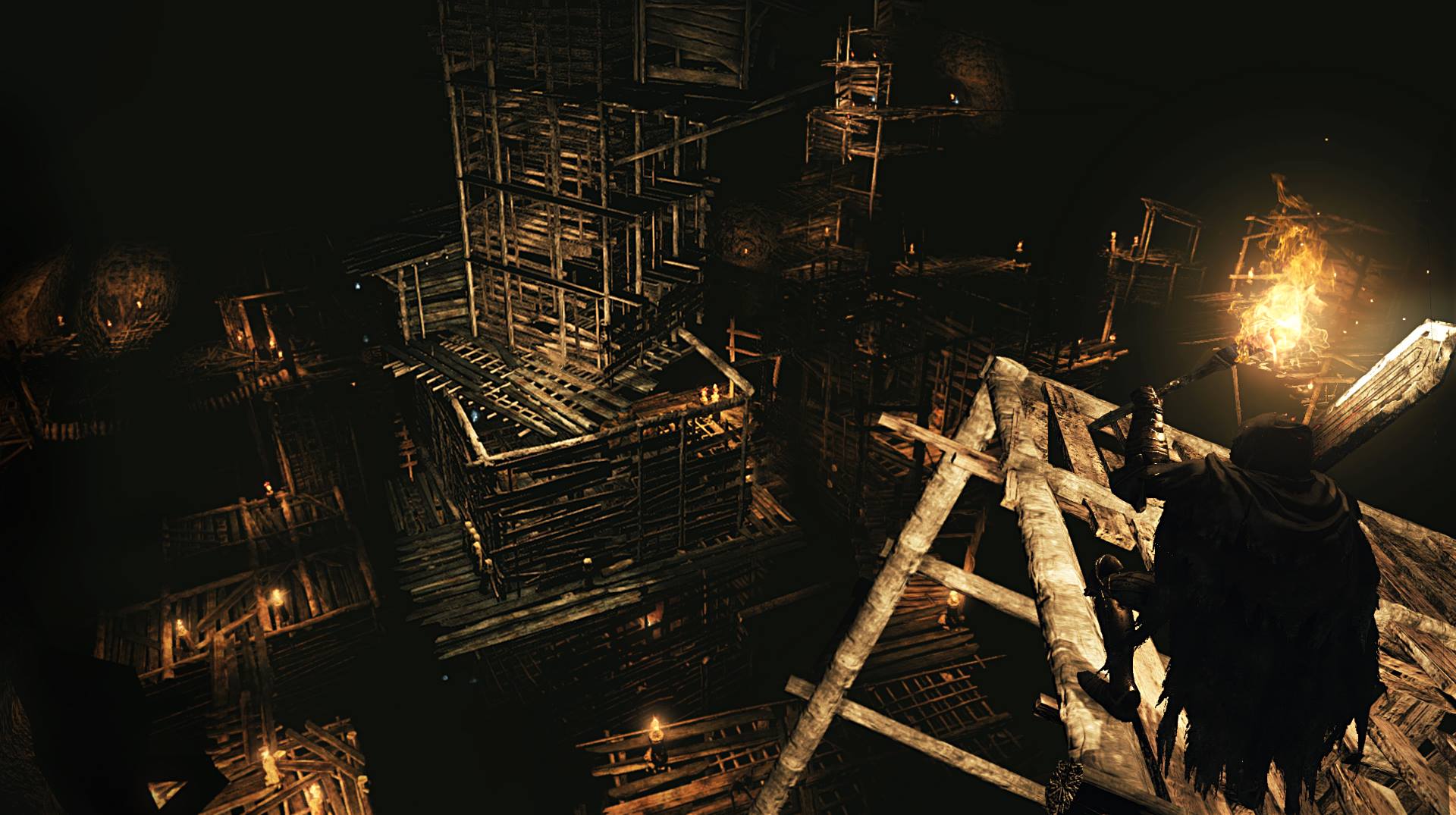 The greatest improvement though is the graphical enhancements made to the game. Sporting 1080p and 60fps as you would probably expect from a next generation console title. The combat is even more fluent than it was before and the crisp visuals can be breath-taking at times. The lighting is the main component that has had a huge overhaul. Relating back to what was previously said about the infamous E3 2013 demo, the lighting presented in this showcase was impressive. Fromsoftware has tried their best to bring that to light in Scholar of the First Sin, no pun intended. And in all honesty, the lighting is pretty darn good. Areas that were previously littered with sconces, with no apparent need to be used, are now pitch black. Forcing the player to forgo their shield for a torch to light the path ahead. The dynamic lighting creates visually impressive shadows which can now help locate enemies round corners or those hiding behind scenery. A new form of hidden enemy is now present called the Invisible Hollow. These are your basic, naked hollow with no ability to be aggro’d and basically unable to attack. They are essentially another form of collectible and can only be seen by using the torch to look for their shadowy outline on walls or the ground. Further encouraging the player to use their torch more often than before

Being a huge fan of the Souls series it’s always disheartening to see parts of the game fall to pieces or not live up to your expectation and as we all know, nothing can be perfect. But when a game or series that you enjoy so much makes you feel like you don’t want to play it anymore, then you know things have got bad. It’s hard to understand the direction Fromsoftware were trying to take Dark Souls 2: Scholar of the First Sin with the changes made. Were they trying to make it more accomodating for new players by adding loads more summons? Or make it harder by adding more enemies? A combination of both doesn’t work out as well as it sounds. The changes aren’t significant enough to warrant another adventure through Dark Souls 2, the graphical changes are the only positive change made and they do look pretty sweet. However if you are one of those unfortunate souls that are tangled up in their own debate whether to get Bloodborne or Dark Souls 2: Scholar of the First Sin, then the foremost would be the better choice. On the plus side the included DLC hasn’t been touched, praise the sun.